On my lap: Medusa the Rich

When I find myself near a bookstore, I try to duck in
and sign stock -- that is, sign any of my books
that are on the shelves. 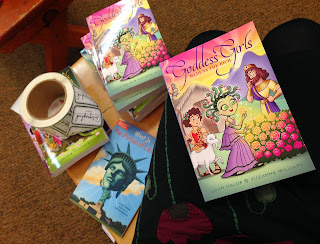 You probably expect this to be some fan mail sort of thing. Well, to be quite frank, it isn't. What I say next is meant with all respect possible.

Let's start simple, shall we? When I first meet a girlfriend of mine, I discover that they like Greek Mythology, same as me! Then I find out that their knowledge of it is very... false, compared to the original, classical Greek myths. I read your description of one of your new books, Amphitrite the Bubbly: "A new mergirl shows up at Mount Olympus Academy..." I mean, please? Mergirl? There is no such thing in Greek mythology! Amphitrite was a Nereid, a group of sea nymphs created by Poseidon!

Oh, and speaking of that, you also messed up the genetics. For the record, Zeus was the youngest out of his other five siblings. In age order from oldest to youngest, it goes Hestia, Demeter, Hera, Hades, Poseidon, Zeus. The fact that you make Poseidon, Hades, and Hestia students at MOA kind of rubs on me the wrong way.

You got the fact that Athena was Zeus's daughter by Metis right, way to go! But the fact that she is the only daughter of Zeus, I mean, come on! So is Persephone, Hermes, Dionysus, and who knows how many others! But most importantly, Artemis and Apollo were also his children, by the Titaness Leto.

Well, I'm focused more on Artemis, but way you portrayed her in your book is insulting, both to me and to her. I'll tell you more about that later, but for the record: Artemis means a lot to me. Heck, she even makes up my penname!

But you have to understand how much more difficult your false-o, so-called "Greek Mythology" books make it to teach my friends. Next time, do your research again.

Each GG is based on a Greek myth, which we carefully research using Edith Hamilton and theoi.com, as well as numerous other resources. There are many wonderful books that are strict NF retellings of the myths, and that's not what we set out to do with GG. Our characters are in Mount Olympus Academy (a middle school), which means some must be twelve and others must be teachers. Amphitrite the Bubbly does mention that Amphitrite is a Nereid and what that means. We appreciate your feedback, and know that not every book or series is right for every reader. I love that you love mythology!