The kids and I had oodles of fun making Zero the Hero masks at a branch of the Wake County Public Library. Mask-making craft directions and pattern are available at:
http://www.joanholub.com/ZeroTheHero.html 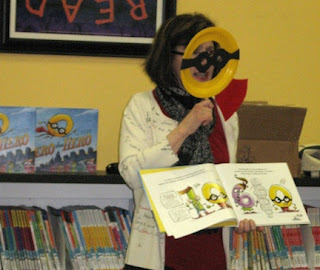 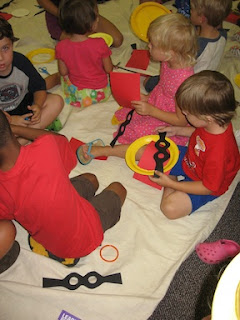 Publishers Weekly Children's Book News included a lovely photo and mention of my author events at the The Bookmarks Festival in Winston-Salem, NC. The festival was fun, fun, fun! 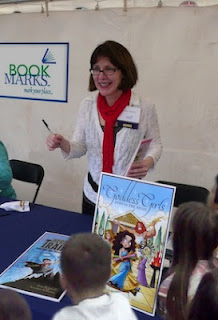 Friday (Sept 7) I spoke to 3 groups of 2nd and 3rd graders at Old Richmond Elementary School in Tobaccoville, NC and at Petree Elem about the Goddess Girls series and Heroes in Training: Zeus and the Thunderbolt of Doom.

September 8 (Sat) Festival Day: About 4:00 pm, I was signing Goddess Girls and Zeus and the Thunderbolt of Doom books. About halfway through the line, a huge windstorm blew in with lightening and thunder, causing the canvas tents to heave and flap around wildly. Talk about “Thunderbolt of Doom!” Everyone ran for cover as the festival crew acted quickly to dismantle tables and tents. It was a crazy fun afternoon! Unfortunately half of the kids waiting to have their books signed did not get them signed. I apologize to those whose books did not get signed and am so sorry I didn't get to meet everyone.

Thanks for stopping by my giveaway in the blog hop!

I'm giving away an autographed copy of:

Listen in on what all four goddess girls are thinking as MOA hosts visitors from many lands--including an adorable kitten!
The Goddess Girls series,
by Joan Holub and Suzanne Williams, is set at Mount
Olympus Academy, and puts a modern spin on classic Greek myths. 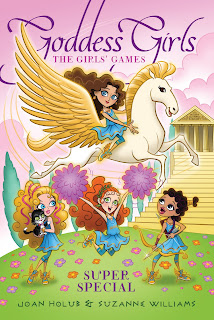 Thank you for stopping by. Good luck in the giveaways.
We hope you enjoy The Girl Games! 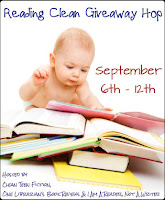