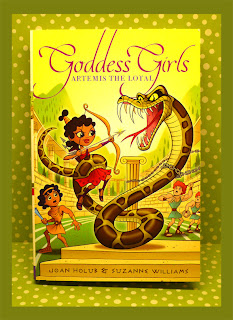 Goddess Girls #7: Artemis the Loyal will be in stores on December 6th.
Follow our blog tour and you may just win a giveaway! (See below to enter to win.)
About the book:
It's time for the annual Olympic Games, and the four goddessgirls are not happy--especially Artemis. Even though she's better at sports than most of the godboys, she can't compete because rules say the Games are boys-only. No fair!

Led by Artemis, Athena, Persphone and Aphrodite, the ladies of Mount Olympus hatch a plan to get Zeus to open up the games to everyone. Will they succeed--or end up watching from the sidelines again?

* GODDESSGIRLS bead necklaces made by Joan and Suzanne.
Strung on colorful stretchy cord, they can be shortened into bracelets. (Beads & cord packages purchased at Michaels say they're not for under age 14. Actual colors will vary.)
* Artemis the Loyal book signed by Joan and Suzanne
* Bookmark featuring six Goddess Girls books

Click to enter at these blogs during specified dates:

“…a clever take on Greek deities…” ~ Booklist
"Readers familiar with Greek myths should get a kick out of this plucky restaging."  ~Publisher's Weekly
“…an enchanting mythological world with middle-school woes compounded by life as a deity…” ~ School Library Journal

Athena the Brain Finding out she’s a goddess and being sent to Mount Olympus brings Athena new friends, a weird dad, and the meanest girl in mythology—Medusa!
Persephone the Phony Hiding her feelings works fine for Persephone until she meets a guy she can be herself with—Hades, the bad-boy of the Underworld.
Aphrodite the Beauty Sure Aphrodite is beautiful, but it’s not always easy being the goddessgirl of love.
Artemis the Brave She may be the goddess of the hunt, but that doesn’t mean Artemis always feels brave.
Athena the Wise Zeus says Heracles has to do twelve tasks or he'll get kicked out of MOA! Although she's not sure it's wise, Athena agrees to help out.
Aphrodite the Diva Isis claims she's the goddess of love? Ha! But to keep the title all to herself, Aphrodite has to find the perfect match for Pygmalion, the most annoying boy ever.

NEW! Artemis the Loyal  It’s time for the annual Olympic Games, and Artemis and her friends are not happy. It’s boys only.  Not fair! (Dec.6, 2011)
Medusa the Mean  When Medusa discovers an ad for a necklace that promises immortality, this looks like her best shot at becoming popular and having her supercrush, Poseidon, finally notice her. Can this "meanie" get what she wants and also prove that there's more to her that meets the eye? (Apr. 2012)
Four more books to follow: Super Special #1: The Girl Games (Jul. 2012) and Books 9 - 11.
Be sure to 'follow' because we'll be adding more giveaways to celebrate each new GG book and posting all the latest Goddess Girls news. We look forward to seeing you! xox
~ Joan and Suzanne

Goddess Girls #1 Athena the Brain and #2 Persephone the Phony will be re-published in special hardcover editions next June (2012)! An unexpected surprise, and one that Suzanne and I are thankful for.
Happy Thanksgiving, everyone! 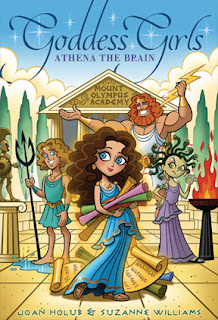 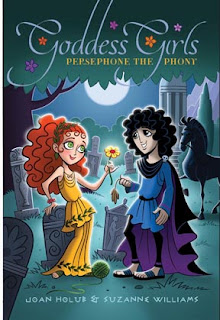