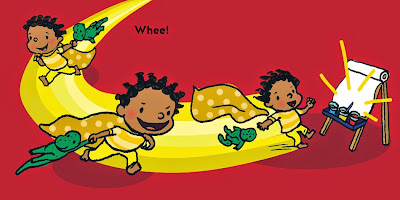 So grateful for this totally unexpected lovely nod from the NY Times
to the Mini Myths board book series
at
http://www.nytimes.com/interactive/2015/05/14/books/review/14childrens.html

Thank you for understanding how I feel about Goddess Girls! I really appreciate it.

There's just one more thing that confuses me. Why did you make Artemis go head over heels for... I think two people now? Orion and Actaeon. I mean, Orion, I get; in a lot of the myths, he was the only man she loved.

What confuses me now is how come Artemis's... feelings for Actaeon are so clearly expressed. Artemis is a virgin goddess, with the only exceptions on Orion, and sometimes Hippolytus (Hippolytus is one of my favorite heroes. He was the son of Theseus and Queen- you know, maybe I'll let you find out). Anyways, Artemis kills Actaeon when he sees her nude by turning him into a stag, and making his hounds kill him. Instead, you go off and make her think he is "sweet", which was better than Orion's "flashy."

Now, I understand that in a children's book, you can't really do the whole "seen while bathing and kills impudent mortal" thing. I thought how you made Artemis fall into the fountain was pretty clever way to change it so it is age appropriate. I just don't understand how come you made her forgive Actaeon so easily, and made her fall in love with him, especially since she is "the VIRGIN goddess of the hunt."

Now, I've only read till book 10, so unless things have changed since then, I'm sorry I wasted your time. And I'm still confused why Zeus hasn't declared his other children that go to MOA, because there's at least five of them. Thanks for helping me understand the other stuff.

PS: I realize I was completely overboard last time. I was angry for a reason that absolutely had nothing to do with you; it's just that when I write when I'm upset, what I write tends to get pretty... chaotic. That's why you should never trust me with anything to write on when I'm mad. I hope I didn't offend you. :)

PPS: Cynthia Luna Silver is a pen name. Just thought I'd let you know. I mean, I'm okay with you calling me Cynthia, but I'd prefer "Super Artemis Fan". LOL

Good question about Artemis. I can tell you are totally worthy of the moniker Super Artemis Fan :o) because you know Artemis well. You're right that it might have made sense for her wind up w/o a crush since she doesn't marry in mythology. After much discussion, we decided to have her uninterested in boys for the first three books, then have her meet an un-crushworthy boy, Orion, and fall in like because that can happen in real life. Sometimes first crushes don't make sense at all, right?! We wanted things to be looking up for her in the end, so we had her make friends with Actaeon, who is part of her mythology. I appreciate you bringing up the other points about her Actaeon crush because we it's helpful to us going forward to know what really bugs readers as opposed to what readers enjoy about the Goddess Girls series.

Good point also about Zeus not declaring his other children. I guess our thinking on this is that we'd have to explain who the moms are and could start to get too adult, or at least become TMI, for some Goddess Girls readers.

No worries about your first email. I like that you are passionate enough about mythology to care how we portray these goddessgirl characters!