Thanks for coming by my giveaway in the Hoppy Easter Blog Hop Giveaway! (April 6-12). Many thanks to Once Upon A Twilight and I Am A Reader. Not a Writer for hosting this hop. 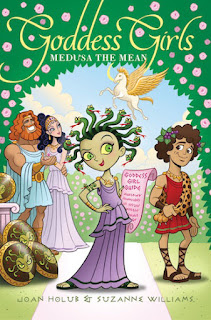 Winners will be announced in the comments section of this post.
Be sure to leave your email in the comments section so I can contact you if you win.
Winners have 10 days to contact me with a mailing address or prize is forfeited. USA & CAN only.
Series scoop:
Follow the ins and outs of divine social life
where the most privileged godboys and goddessgirls
in the Greek pantheon hone their mythical skills.
“…a clever take on Greek deities…” ~ Booklist

"Readers familiar with Greek myths should get a kick out of this plucky restaging."  ~Publisher's Weekly
“…an enchanting mythological world with middle-school woes compounded by life as a deity…” ~ School Library Journal
Athena the Brain Finding out she’s a goddess and being sent to Mount Olympus brings Athena new friends, a weird dad, and the meanest girl in mythology—Medusa!
Persephone the Phony Hiding her feelings works fine for Persephone until she meets a guy she can be herself with—Hades, the bad-boy of the Underworld.
Aphrodite the Beauty Sure Aphrodite is beautiful, but it’s not always easy being the goddessgirl of love.
Artemis the Brave She may be the goddess of the hunt, but that doesn’t mean Artemis always feels brave.
Athena the Wise Zeus says Heracles has to do twelve tasks or he'll get kicked out of MOA! Although she's not sure it's wise, Athena agrees to help out.
Aphrodite the Diva Isis claims she's the goddess of love? Ha! But to keep the title all to herself, Aphrodite has to find the perfect match for Pygmalion, the most annoying boy ever.
Artemis the Loyal  It’s time for the annual Olympic Games, and Artemis and her friends are not happy. It’s boys only.  Not fair! (Dec.6, 2011)
NEW! Medusa the Mean  Medusa wants to be more like her two sisters and the other kids at Mount Olympus Academy -- immortal. Is that too much to ask?  (Apr. 2012)
The Girl Games (Goddess Girls Super Special) The first-ever standalone superspecial in the Goddess Girls series—let the games begin! The Goddess Girls get their chance to host the Girl Games! Told in alternating points of view, this superspecial is packed with Olympic spirit! July 2012
To continue on in the blog hop, click this link.
Good luck to everyone! 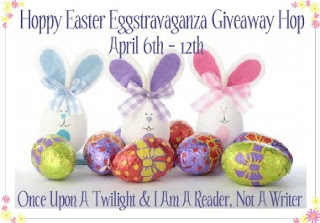 Just found your blog....I am now following! Thanks for the chance to win

Followed on Facebook and added to my page (Shadows In A Timeless Myth) favorites.
teresa AT spunsilk DOT com

New follower. Thanks for the chance and Happy Easter!
langleylove at gmail dot com

I liked "Goddess Girls" on Facebook and followed your blog. :-) My name is Lauren Smith, and my email address is ticklesdibbler@aol.com.

GFC-Persephone
Thanks for the giveaway.

thanks for the giveaway : )

Thanks to all who have dropped by so far in the Hoppy Easter blog hop! And thank you for 'liking' on FB and following on FB and/or this blog. Much appreciated.

~ Medusa the Mean
(and Joan)

Have a wonderful weekend. xox

New Follower GFC Amber Garcia
My daughter just started reading the Goddess Girls books and she loves them she is only in the first grade.
Thanks for the giveaway!
agarcia6510@columbus.rr.com

I would love to win this for my daughter.

thanks for the giveway i am on fb as
desitee reilly

Follow via GFC: Lauren Mackesy
My daughter would love this!
Lmackesy @ gmail.com

Thanks so much for the chance to win :)

My daughter loves this series.

Thanks for the giveaway :)
GFC(Mona Garg)

Hello! I blogged about Zero the Hero today; come on by when you get a chance. Thanks for such a CUTE treasure!

Barbara
The Corner On Character

Tamar W follows this blog via GFC.
tamarsweeps at gmail-dot.com

Just dropping in to say a huge thank you to all of you who have stopped by during the blog hop. We so appreciate your FB likes and tweets, which are such a help in getting the word out about our new release.

Thank you for the excellent giveaway. I would love to read this book with my granddaughter.

following on GFC as shannon gallagher (no capital letters)

liked you on FB as Shannon M Gallagher

I follow via GFC as Leslie S.I have never heard of these books but want to get them now for my kids as I am greek mythology buff.Thanks!
lstanziani(at)yahoo(dot)com

I like Goddess Girls on FB as Leslie Luke Stanziani.Thanks!
lstanziani(at)yahoo(dot)com

Thanks for the giveaway!
GFC - Tressa

The 2 winners of an autographed GODDESS GIRLS: MEDUSA THE MEAN are:
Lisa Faber
gfcDonna

I'll try to contact each of you via email.