We're celebrating the new release of  Goddess Girls #5: Athena the Wise with a blog tour with lots of giveaways during April. Click below to enter to win! 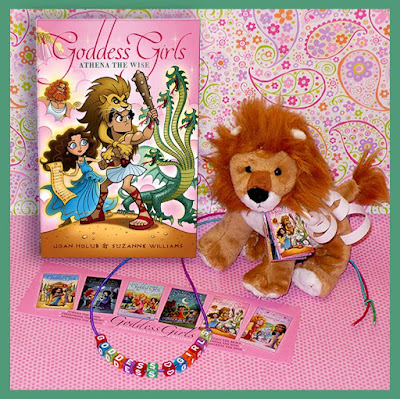 ATHENA THE WISE GIVEAWAYS:
* GODDESSGIRLS bead necklaces made by Joan and Suzanne.
Strung on colorful stretchy cord, they can be shortened into bracelets. (Beads & cord packages purchased at Michaels say they're not for under age 14. Actual colors will vary.)
* Plush lion (Heracles comes up against a fierce lion in the book!)
* Athena the Wise book signed by Joan and Suzanne
* Bookmark featuring six Goddess Girls books

“…an enchanting mythological world with middle-school woes compounded by life as a deity…” ~ School Library Journal
Series scoop:
Join the class at Mount Olympus Academy with Goddess Girls, a new series that puts a modern spin on classic Greek myths!

Aladdin paperbacks, ages 8 ~ 12.
Athena the Brain Finding out she’s a goddess and being sent to Mount Olympus brings Athena new friends, a weird dad, and the meanest girl in mythology—Medusa!
Persephone the Phony Hiding her feelings works fine for Persephone until she meets a guy she can be herself with—Hades, the bad-boy of the Underworld.
Aphrodite the Beauty Sure Aphrodite is beautiful, but it’s not always easy being the goddessgirl of love.
Artemis the Brave She may be the goddess of the hunt, but that doesn’t mean Artemis always feels brave.
*NEW! Athena the Wise Zeus says Heracles has to do twelve tasks or he'll get kicked out of MOA! Although she's not sure it's wise, Athena agrees to help out. (April 5, 2011)
Aphrodite the Diva Isis claims she's the goddess of love? Ha! But to keep the title all to herself, Aphrodite has to find the perfect match for Pygmalion, the most annoying boy ever. (August 2011)
Two more Goddess Girls books to come!

Carrie at In the Hammock Blog said...

Yay! I'm so excited about the contests! Can't wait!

Carrie, you are so sweet to drop by. I appreciate it. I'm excited about your Goddess Girls Athena the Wise review and giveaway which starts...

My daughter and I read chapters every night... and the Goddess Girls books have been a standing favourite of ours for some time now. She's only four, so we've been reading chapter books for a year now, but in that time we've devoured a rather large selection of books. :) We are actually on Athena the Wise right now. I've blogged about the series on a couple of occasions and am actually getting ready to begin a scrapbook page sharing my favourite time of day - when us grrrls cuddle up in bed to read our nightly chapters.

Thanks for such a delightful series!