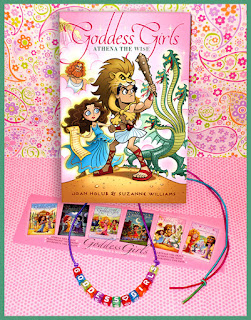 Thanks for coming by my giveaway in the blog hop sponsored by I Am A Reader Not A Writer and Once Upon a Twilight.

* One autographed copy of Goddess Girls #5: Athena the Wise
by Joan Holub and Suzanne Williams
(April 2011, Aladdin, ages 8-12)
Zeus says Heracles has to do twelve tasks or he'll get kicked out of MOA. Although she's not sure it's wise, Athena agrees to help out.
* GODDESSGIRLS bead necklace made by Joan and Suzanne. Strung on colorful stretchy cord, they can be shortened into bracelets. (Beads & cord packages purchased at Michaels say they're not for under age 14. Actual colors will vary.)
* Bookmark featuring six Goddess Girls books

Thanks! I'll contact the randomly-chosen winner for address and will post winner's name here.
Contest runs April 20-25. USA only.
“…a clever take on Greek deities…” ~ Booklist

Athena the Brain Finding out she’s a goddess and being sent to Mount Olympus brings Athena new friends, a weird dad, and the meanest girl in mythology—Medusa!
Persephone the Phony Hiding her feelings works fine for Persephone until she meets a guy she can be herself with—Hades, the bad-boy of the Underworld.
Aphrodite the Beauty Sure Aphrodite is beautiful, but it’s not always easy being the goddessgirl of love.
Artemis the Brave She may be the goddess of the hunt, but that doesn’t mean Artemis always feels brave.
*NEW! Athena the Wise Zeus says Heracles has to do twelve tasks or he'll get kicked out of MOA! Although she's not sure it's wise, Athena agrees to help out. (April 5, 2011)
Aphrodite the Diva Isis claims she's the goddess of love? Ha! But to keep the title all to herself, Aphrodite has to find the perfect match for Pygmalion, the most annoying boy ever. (August 2011)
Two more Goddess Girls books to come!

Thank you for the giveaway! I'm already a follower :)

This would be perfect for my niece!

My Daughter would Love this book :)
Thanks for the chance to win :0)

Thanks for the giveaway!
GFC Follower - Memrie

My daughter would love this book :) Thank you for taking part in the hop! Happy Easter :)

Happy Easter! Thanks for the chance to win giveaway.
I'm a GFC follower - Cindy Macbeth

My daughter would love this, thanks lisapeters at yahoo dot com I follow

Thanks for the giveaway my nieces would love this.

My great-niece would really like this book and necklace...
Many thanks, Cindi
jchoppes[at]hotmail[dot]com

This is awesome! I am a follower!
4everareader@comcast.net

Thanks so much for dropping (or hopping) by the giveaway here! I really appreciate it and wish you good luck in the blog hop. Lots of awesome giveaways on the list. xox

These books look so fun!

Thanks for the giveaway! I follow you via GFC (Throuthehaze)

Thanks for the great giveaway. My daughter would love this book.

Love these books -- what a great concept to teach mythology that is so hard to learn sometimes !!

Following you through GFC -- Kimmie, Nola

Liked the "Goddesses" on FB

Thanks for the wonderful giveaway!!

The book's too cute!!! Definitely enter me!

My daughter has been wanting to read these books! Thank you for the chance to win one for her@

Love that I found your blog. My granddaughters will love these. Great way to teach History to them.
GFC follower under Lucky47.
Carol L
Lucky4750@aol.com

Thanks for the giveaway. I would love to read this series with my daughter and the covers are too cute.

Thank you for the giveaway!!
GFC Shannon Johnson
shannonjean14(at)gmail(dot)com

Thanks for the giveaway!
GFC follower -- Taku (this account)

I just saw these books for the first time over on another blog and I think they're awesome. I have a little boy but he's all into Greek Mtyh and I would still read him these. I don't think they're for girls only. I'd love to win this book. I'd have to get the first few. Thanks =)
gfc follow as Tanyaw1224
Tanyaw1224(at)yahoo(dot)com

Thanks for the giveaway. I would love to win this for my daughter. Happy Easter!

I LOVE Groundhog Weather School (very, very funny). This was one of the books that I used for my Groundhogs Day storytime program. Thanks.

What a cute book. Thank you for participating!!

I so wish this series would have came out about 10 years ago. haha. These sound so cute to my now; I'm sure I would have loved them even more when I was in the right age bracket. ;)

I would love to read this book. Thank you for the great giveaway.

Wonderful giveaway! I'd love to give the book a read before passing it on to a younger family member ;)
I'm a fan on facebook (Kaity Gatchell)

GFC follower. This would be great for my daughter.

Thanks for the giveaway and for participating in this blog hop! I'm a new follower via GFC (MamaHendo3).

thanks for the giveaway.. im a follower here and i liked goddess girls.

Thanks for playing everyone! This was my first hop and you made it awesome. I'm participating in several others in May. Take a look at the right column for the links. My sister randomly chose the winner for me. Congratulations to Small Review!
I'll try messaging you for an address and will hope to hear from you.

Thanks again to everyone who dropped by and friended!