The Knights Before Christmas 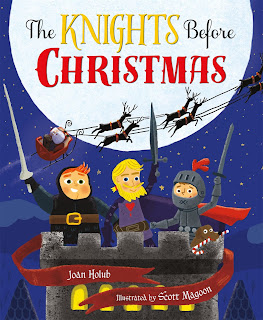 Christmas in September?
Seriously, it's almost half off the cover price if you pre-order right now!
http://tinyurl.com/ptrlwtu

'Twas December 24th, and three brave knights were just settling in for the night when out on the drawbridge, there arose such a clatter! The knights try everything to get rid of this unknown invader (Santa Claus!), a red and white knight with a fleet of dragons . . .
But nothing would stop
their white-whiskered foe.
No matter their efforts,
he just would not go!

Kirkus Reviews:
Three young knights defend their castle from "a red-and-white knight and eight dragons. Oh dear!" Santa travels back in time to a fanciful medieval Europe with knights, lords, and castles in this clever parody of "The Night Before Christmas." The text unfolds in pitch-perfect rhymes that follow the basic pattern of the classic poem, with the addition of witty wordplay incorporated into speech balloons and in signs, lists, and banners on the castle walls. The three knights are named Brave Knight, Polite Knight, and Silent Knight, each with a distinct, appropriate personality. When Santa arrives to deliver gifts to the castle, the knights see him as an intruder and try to repel his advances. Santa is just as determined as the knights to succeed in his own mission. He flings his presents and holiday decorations into the castle with an evergreen-tree catapult, which the knights then appropriate for the castle's Christmas tree. Digitally produced illustrations in deep jewel tones successfully bring to life the complex physical world of the castle and skillfully meet the logistical challenges of the knights' battle of airborne gifts with Santa. There's an excellent interplay between the amusing illustrations and the polished text, with lots of clever jokes for readers to discover in the art. These knights know how to keep the castle safe and the readers entertained. (Picture book. 4-8)

Thanks for joining us in the Kid Lit Blog Hop, Joan! I'm very excited about your new book. I'll share info about your giveaway. :)

I am super excited about this one.. love the art and I can see this one being a super hit at our school. Thanks for sharing on KidLitBlogHop!

Hey stopping by from KidLit Blog Hop! This book drew my attention from the all the links up there. I love the play on words. It looks like a really great book. Illustrations in children's books are so important because they help attract and engage the child. They help them begin to paint their own pictures in their imaginations. I can't wait to check this book out with my little ones! Thank you for sharing.

Sounds like a great book for little boys -- knights and Santa! Thanks for sharing at the Kid Lit Blog Hop!