Hi all! Thanks for coming by my giveaway in the Best of 2011 Giveaway Hop December 27-31. Many thanks to I Am A Reader. Not a Writer for hosting this hop. 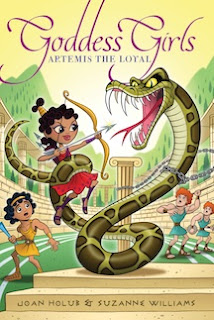 1st prize: One winner will be randomly chosen and announced in the comments section of this post.
2nd prize: Two winners will receive autographed bookmarks featuring all 9 Goddess Girls books!
Winners have 10 days to contact me with a mailing address or another winner will be chosen. USA & CAN only.
About Artemis the Loyal:
It's time for the annual Olympic Games, and the four goddessgirls are not happy--especially Artemis. Even though she's better at sports than most of the godboys, she can't compete because rules say the Games are boys-only. No fair! Led by Artemis, Athena, Persephone and Aphrodite, the ladies of Mount Olympus hatch a plan to get Zeus to open up the games to everyone. Will they succeed--or end up watching from the sidelines again?
“…a clever take on Greek deities…” ~ Booklist
"Readers familiar with Greek myths should get a kick out of this plucky restaging."  ~Publisher's Weekly
“…an enchanting mythological world with middle-school woes compounded by life as a deity…” ~ School Library Journal

Series scoop:
Athena the Brain Finding out she’s a goddess and being sent to Mount Olympus brings Athena new friends, a weird dad, and the meanest girl in mythology—Medusa!
Persephone the Phony Hiding her feelings works fine for Persephone until she meets a guy she can be herself with—Hades, the bad-boy of the Underworld.
Aphrodite the Beauty Sure Aphrodite is beautiful, but it’s not always easy being the goddessgirl of love.
Artemis the Brave She may be the goddess of the hunt, but that doesn’t mean Artemis always feels brave.
Athena the Wise Zeus says Heracles has to do twelve tasks or he'll get kicked out of MOA! Although she's not sure it's wise, Athena agrees to help out.
Aphrodite the Diva Isis claims she's the goddess of love? Ha! But to keep the title all to herself, Aphrodite has to find the perfect match for Pygmalion, the most annoying boy ever.
NEW! Artemis the Loyal  It’s time for the annual Olympic Games, and Artemis and her friends are not happy. It’s boys only.  Not fair! (Dec.6, 2011)
Medusa the Mean  When Medusa discovers an ad for a necklace that promises immortality, this looks like her best shot at becoming popular and having her supercrush, Poseidon, finally notice her. Can this "meanie" get what she wants and also prove that there's more to her that meets the eye? (Apr. 2012)
The Girl Games (Goddess Girls Super Special) July 2012
To continue on in the blog hop, click this link.
Good luck and happy holidays!

I would love to have an autographed copy to give to one of my students during Children's Book Week. Thanks for writing such a great series.

My contact info is bevarcher (at) me (dot) com

My library finally bought the GoddessGirl Series! However I don't think they have this one yet... bookgeeksrule AT gmail DOT com

These books would make a great addition to my school library. I know the girls would love them. Thanks for the giveaway.

This sounds like a great series - would love to win this one!

Every time I see that cover I am tickled. I really like it. You've done something wonderful with this series.

Big Thanks in participating and hosting this giveaway!! It's so hard to believe that 2011 flew by so fast! I'm still in awe about it and that it's about to be 2012 *_* lol
I hope you have a safe and rewarding New Year!!

What a cute series! Thank you for the giveaway!

Thanks for the giveaway!
GFC: Valette M.
pomegranatesunrise(at)gmail(dot)com

My daughter loves these books!

Hi Booklady! Children’s Book Week is a wonderful celebration. Thanks for thinking of Goddess Girls for your students. CBW is May 7-13 this year. I read that David Wiesner is creating the poster. Fun!

Hi Heidi, you’re welcome. I love seeing the GGs in libraries, especially when I find that they are all or mostly checked out. :o) I recently heard that books 1 & 2 (Athena the Brain and Persephone the Phony) will be reprinted in a library hardback edition in 2012.

Hi Susan, thanks so much for your kind words!

Angela, thank you! And I completely agree about the covers. Glen Hanson is the cover artist and he is amazing. Fast and creative. His covers jump off the bookstore shelves.

Thanks, Gabrielle! I hope they enjoy them. Tell them hi from Suzanne and me.

You’re welcome, Kayla. Thanks for finding me in the blog hop!

Hi littleangel and Valette, thank you both for coming by my blog and commenting today!

Marie! So good to see you. Please tell your daughter hi! xox

Good luck to you all in the Best of 2011 blog hop giveaways. Happy holidays!

Thank you so much for the excellent giveaway. I had one of this series and lost it when I lost my home back in May in the tornado. I would love to get another for my granddaughter and I to read.

I know my daughter would love this book.

The books look really good...Maybe I can convence my 9 year old sister who hates books to try to read this one.

Thanks so much for the giveaway :)
What a fun way to learn mythology and very cute covers!

Have a good day

I love this series! Thank you for the giveaway!
helldog3 at aol.com

Thanks for the giveaway!
GFC: Runaway Bridal Planner
runawaybridalplanner(at)hotmail(dot)com

Happy New Year's Eve to you all! Thank you for your lovely comments and for taking part in the Best of 2011 blog hop.

Congratulations to Heidi Grange, winner of an autographed Artemis the Loyal.

Congratulations to Runaway Bridal Planner and wyantebay, winners of autographed GG bookmarks. They're new, not off the press with all nine book covers!

I'll contact winners directly if emails were given. Please email me at joanholub at aol dot com with your mailing addresses.

Thanks for the giveaway! Following via GFC - Cheap Is The New Classy. Email is cheap_is_the_new_classy@yahoo.com. Happy New Year!

Thank you for the chance to win! edysicecreamlover18@gmailDOTcom

Oh my gosh! I'm totally stoked!! My 9-yr old daughter LOVES, LOVES, LOVES the Goddess Girls series!! Yippee! I just showed her your blog and she was very excited :) She loves the cover of The Girl Games and was excited to see the Medusa one coming up in April!