Children's Literature Center at the Library of Congress 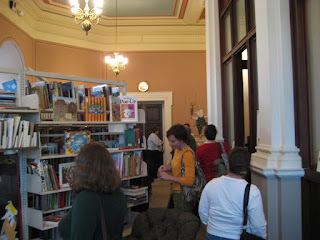 I had the pleasure of attending the 3rd annual KidLitCon 2009 last weekend, which was organized by Pam at MotherReader. What a great time. Informative and fun. Not only did we have a day of bloggeriffic speakers on Saturday, we also had the opportunity to get a behind-the-scenes look at the Children's Literature Center at the Library of Congress Friday afternoon. My friend Barbara and I arrived a bit late, but the LOC folks were amazingly accommodating to the latecomers in our group. Several winding corridors and a spiral staircase later, we were in! We heard talks by Sybille Jagusch PhD, who showed us a James Marshall original dummy and sketch, and by another wonderful guy whose name I didn't get in the rare books room, who showed us 15th century books. What an experience! I felt so lucky to get a peek in the back rooms. As usual, I had no camera. Luckily my pal Barbara brought hers, which is why I can share these photos. 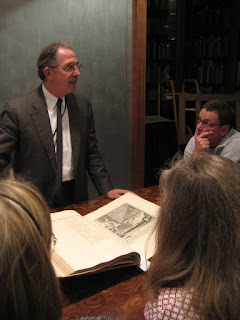 Bill Prosser of literatelives.blogspot.com listens in the rare books room of the LOC. You can't see it here, but the tabletop had a really cool swirly tree-ring design which Bill and I wondered about. From real trees? Antique? We'll never know. 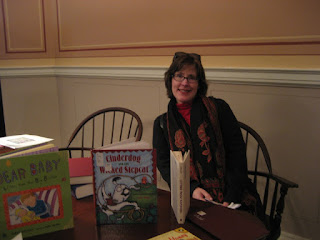 Me in the Children's Literature Center, where the lovely Sybille and her cohorts were kind enough to display the books of visiting authors. I only wish my blog partner at readertotz, Lorie Ann Grover could have made it this year. She attended in 2008 and told me how great it was. She was right!
Posted by Joan Holub at 12:24 AM

So fantastic, Joan! Glad you could go!

It was a wonderful peek into the LOC. They were so generous, weren't they?

What a weekend of good stuff. It was great to meet you, and for the record, I think the wood swirlies were fake. The kids love The Groundhog galley in THE PIT, thanks for that.

Joan good to meet you at the kidslit conference the other month--hopefully we'll cross paths again sometime!